A day in the life of a Woman in Tech 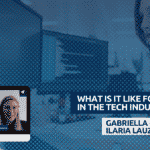 Gabriella: Your journey couldn’t of gone without any struggles. Have you had any real obstacles to overcome? What would you say has been an obstacle for you?

Ilaria: Well, a lot of times I have been lucky, but a lot of times I have cases of minor sexist aggression or casual sexism that kind of blocked my path a little bit. So I remember a case of a project where my supervisor was very, very helpful throughout the project and kind of to treated me a bit like a doll. He always thought I needed to be protected and needed to be directed correctly. And I was an autonomous person. But I did not know what to expect from a project that was my first project, and a lot of autonomy was actually required of me. And I would have been fine with that. But the supervisor did not see me as someone that could have that autonomy. So he just guided me too much. And in the end, it came to me and told me, Well, you should have done more work, you should have done more things on your own. And I had basically no idea, and that was the point. He had not the same flexibility that he had had with my colleague who was a man, and I felt like, well, I could have done a much better job. And I’ve had a bad grade for this course, and a lot of people had this idea that I needed the help when I never really requested it, I just followed along and what I thought was the project, what I thought it was supposed to be like, and that actually made me think it made me really promise myself that I would not allow people to treat me like I needed help, like, I needed someone to follow me so closely. So from that moment on, I always make sure that I told people I’m okay with working on my own. I don’t need you to tell me exactly what to do, explain to me the basics, tell me what is expected, I’ve come so far, I can take it on my own. A lot of times, showing this autonomy from the start has helped. And, yes, just a lot of things like this, just a lot of people who underestimate what I can do at the start because again, I don’t specifically look like the stereotype that an engineer is. And I try to fight against that to prove a lot of the time, for instance, anybody is asking who can carry the table, and I’m free I’m gonna be like, no I’ll carry the table. No problem. Sure. I have two hands. I have two legs. I’m lucky. So let’s go. And a lot of times people are shocked. And there’s just so many little things that they think I’m not capable of or wouldn’t be comfortable doing. I’m trying to break down one at a time. So overall, I have been lucky. But there are always going to be obstacles in the path ,and I hope that’s not going to be the case in the future and these that will be removed further, and people won’t need to do any additional steps more than required.

Gabriella: Yes. I’m sorry that you’ve experienced things like that. That’s not nice. But would you say that you’ve encountered many women in your career so far?

Ilaria: Well, absolutely I have encountered a lot of people that worked with me or studied with me. It’s not the same level, compared to men. But I can certainly not say that women are not present. It’s just that a lot of times when they have certain experiences like that or worse, even like sexual assault or people who are going through harassment, etc. That makes it much harder for them to go further. But they are there a lot of times they might not reach the same positions as a man, which is sad. And I hope that we can continue changing this. But I’ve had, for instance, I have a colleague that was with me in my Bachelor. She is now doing a PhD in robotics as well. So I know that this is possible. This is already happening. We just have to keep pushing it and make sure that this will become the norm so that people will be able to already have in mind that positions like this are filled by women. And that’s okay. That’s normal, that’s standard. Any of two of the sexes and any gender can fill the position and still do the job well.

Ilaria: So not specifically in my field. I do have certain role models. So, for instance, certain professors one is Professor Hack. Actually, she was a professor in Astrophysics. I actually met her once and it was great meeting her. So she was a person that was very rational. And she’s always been very good at her job. And actually, the second role model that I have is my mom. She’s not in a technological field, but she’s always pushed me so much. And she has actually gotten her degree later in life. But like, about fifty and me and her were studying together. We were doing the University at the same time.