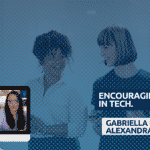 Gabriella: Thinking forward, where do you see yourself in the next five years? Do you have a goal?

Diana: Yeah well, the most tangible one is for me to start the new formation that is a bit more people-oriented I would say I’ve always been a very communicative person, and I really feel that I want to combine this technology side with working more with people and interacting more with them. And I would really want to go through a direction where I can do this more, maybe a management position, or maybe I don’t know, anything that would allow me to do this, I’m planning to start the formation in that direction yeah, let’s see how it goes.

Gabriella: I would say I think that’s brilliant I mean, there’s not many women who are managers, especially in the technological field, so I think that’s a great goal, and I guess playing on that, and obviously you joining this sector, becoming a team leader, that would be amazing. How do you feel that we could get more women into technology and kind of get them on that career path as well?

Diana: Well, for me, it depends a bit on what target women are looking at. I would say that you can start with the kids. For example. I know my math teacher, who was an amazing teacher, actually encouraged me a lot to go in this direction when I was not that sure that I was good enough to do this, so I would say that it definitely starts in school, in the young education, and then looking at women who are already in another field and who would want to switch to a tech position, I think it’s important for us, the women who are already here to be more visible for them and to actually show to the world that it’s possible to be in such a position and that we are no longer giving the impression that it’s only men who should be in this kind of field. So definitely being more visible and for them to try and to prove themselves that they are capable and able to do this, I know that at least for me, this is working the best to show myself I can do this. So next time it won’t be that hard to do it again.

Gabriella: Yeah. Did you have a mentor or someone you kind of looked up to when you were kind of starting out?

Diana: It was not necessarily a mentor, it was more like for me it was the group of my colleagues that we were usually learning for the exams and in the labs together, and for me, it was very important to look up to those people and to see that they know what they’re doing. They’re passionate about this and more important that it seems easy for them to do this, so at some point, it should be easy for me to do this at some point, too, I’m not saying it’s easy, but I’m saying that it’s less of a mental struggle to start in the tech are than it was for me three or four years ago, that’s for sure.

Gabriella: And you mentioned, obviously the visibility of women doing these jobs and being in these positions. What kind of platform do you think would be beneficial to see them on? Where do you think they would kind of get the most visibility?

Diana: Well, I think for this, we should actually look on what people are using the most. Definitely. It’s LinkedIn on the professional side that is a great way to promote this, but on the other side, I think we should go on a bit more non-formal platforms, like anything that people are using. Instagram, maybe Facebook, because sometimes it’s just seeing that it’s normal for people to do this, and it is not only a professional thing, it makes you think that actually it’s not that hard to do this, and you can enjoy doing this because it’s very important to enjoy what you’re doing, so yeah, definitely going in a non-formal platform too.

Diana: Excellent. Yeah, I think that’s a great idea, on my social media platforms I certainly don’t see much of it. So I think it’s definitely something that platforms like that could take some responsibility for and be a bit more advocating. I think they’re brilliant ideas definitely. Perhaps if we ever get in a position where we could take over the world Diana, we could make a difference there, but it’s great to hear your thoughts and how you make it a bit different.