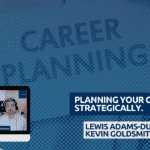 ‘The people who have a plan are typically the most successful’.

When you consider a new job, do you also ask yourself what jobs it could lead onto in the future?

In this new video of Preparing the Unprepared Lewis Adams-Dustan talks to Kevin Goldsmith who explains that the best practises for aspiring leaders and CTO’s is building a strategy.

Its never too early to make purposeful and deliberate career decisions and work towards your goals! Watch this video to find out more!

Lewis Adams
So you’ve had quite an interesting journey. And I think there’s a couple of key takeaways that I noticed there; that you took the opportunity. You kind of took risks. When something presented itself, you went for it.

Kevin Goldsmith
Yeah. I think that’s true. I think the one thing that I would characterize as I got more experience, one thing that did change, I think earlier on, I was doing the job, Somebody came to me with a sort of interesting job. I said, okay, I’ll go do that then. And it wasn’t purposeful. It was sort of like, oh, that sounds cool. I’ll go do that now. And as I kind of moved into kind of move through my career, I started to realize, you know what?

I do need a bit more of a plan. I need to start thinking about not only what is my next job, but what is a job that I’ll have because I had that job, right. What’s the job After? I started thinking a little bit more in terms of kind of where did I want to go? And what was the best way to get there? Really? Spotify was at the time I joined Spotify, It was a cool company, but it wasn’t exactly Spotify, right. It was one of the streaming companies. But what I liked about that company at the time was just the way they did things differently. And I knew if I went there, I was going to learn a lot. I had a strong feeling that they were going to keep growing, and that was going to let me go and be a CTO, which was my goal. And so that was the other thing is I could have stayed at Spotify. It was a great place to work. I loved working there, but I knew I was never going to be at Spotify as CTO because the CTO was never going to leave that job.

Lewis Adams
I mean, maybe I’m assuming here. But Spotify at the time, you’re a bit of a musician yourself. Was there more interest just because of the nature of the business there, or did you follow the specific role to go and develop your skills? What was the decision at that point?

Kevin Goldsmith
Yeah. So as I mentioned, I had been on the Windows media team, I mentioned that I started a start-up. I left Microsoft to join a start-up that was a streaming media start-up. I started a streaming media start-up, and actually, I didn’t mention my very first job when I was still in University. I was actually at IBM research where I was working on very, very early streaming. So beyond the graphic art, which also kind of overlaps with streaming, I kind of had a long history of the stream. But, of course, I’m also a musician. I run a record label, was the general manager of a radio station at University. So I had a strong affinity for Spotify on that level as well.

Lewis Adams
Brilliant. And do you think the turning point for your career is in terms of taking that next step? Because I want to kind of move on to a little bit later in the conversation that best practices for aspiring leaders or CTOs, was it building that strategy, having developed all of those skills, and then finally say, okay, now I want to take them in a certain duration?

Kevin Goldsmith
So, yeah. I think the big change for me and just the way I thought was just really thinking about my career. And part of it was now getting into companies when you’re young and you’re the youngest person on the team, and you see all these people doing these jobs that maybe you might want to do someday, but they’re older than you, and you figure, okay, well, I’ll figure out I got a lot of time and you get to a point where now you’re starting to be older, you’re getting older than the people you work for, and you start looking at well, especially if they’re in jobs, that one.