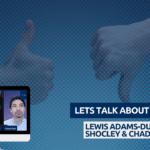 Have you ever been ghosted? It can be frustrating, especially after investing a lot of time into talking to a business.

In this next video of Preparing the Unprepared Lewis Adams-Dunstan talks to Abby Shockley from Petram Data and Chad Oda, a partner at Chat Mode on the importance of receiving feedback but also the reasons why companies struggle to give feedback.

But should all feedback be taken on board?

This is a must watch for employees and employers who want to offer the best support to their applicants.

Lewis Adams
So welcome, everybody, to another episode of Preparing the unprepared prepared. I’ve got a few guests with me today. We’re still waiting on one. I think he may join us hopefully soon, but essentially we’re going to be talking about the importance of interview feedback. I know personally that Ghosting is a topic that I see often being discussed on LinkedIn and a very frustrating one for me as a recruiter and as I’m sure for you guys, as potential applicants or even as people who are hiring into teams not receiving feedback from people throughout the actual interview process. So today I brought on Abby Shockley. She’s a data science leader at Pitrum Data to welcome Abby. Thanks for coming. We got Chat Oda, who’s a partner at Chat Mode, and he’s also Hosts own podcast called The Bot Podcast. So I just want to ask you guys, why is feedback so important?

Abby Shockley
Well, you can’t improve if people don’t want to share with you what’s going on. And then, on the other hand, too, not all feedback is good feedback, so it gives you the option to see. What are people thinking about me? What do I think I need to change? And what do I think is not so great feedback. And I’m willing to put that to the side because I like the way that im doing things.

Chad Oda
Yeah, I agree with Abby’s these points. I think feedback predicates any improvement in any place, especially in areas such as sort of emerging technology, where there are not sometimes like our standardized best candidate roles because some of the best practices and standards are evolving. So I think feedback is even more important there.

Lewis Adams
I think it’s a pretty emotional experience as well, given feedback, because essentially it’s how you feel about having spoken to someone, and not everyone feels super confident giving feedback honest feedback. At least I think you need it to be able to grow. And too often as a recruiter, I’m getting kind of people asking me where the feedback is, and sometimes I don’t even have it. And I’m trying to figure out where the breakdown is, especially when someone’s invested a lot of time into talking to business, whether it be one stage or three stages.

Abby Shockley
It sort of depends on what’s going on in the organization. So I’ve seen instances where a role suddenly got canceled because another Department was hired, and then they’re like, oh, no, we don’t need this role anymore. And then you’re like, they rescheduled my interview, like, four times, and I’m not hearing anything. Maybe I should just move on. And the company may not want to come out and tell you we’re having more challenges than we were expecting because the hiring manager might be attached to that role. So they might even be so upset that they’re not even willing to tell you we had some challenges there. That’s hard stuff for people to talk about.

Chad Oda
Yeah, I think the other facet to that, even for smaller consulting organizations like our own, really comes down to availability. Sometimes we just don’t have all the time to give feedback, even though we want to give it. But I try and be intentional about giving feedback because a lot of times people getting into the space that I’m in, which is conversational AI people are looking for feedback because there are no real standards when it comes to what is a good candidate versus maybe a candidate that needs to maybe buff out their portfolio a little bit more.