Re-Entering the Workplace After Maternity Leave 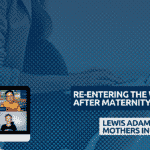 Lewis: Now, in terms of re-entry back into the workplace, whether you’re in America and you get three months, which, by the way, is crazy, I’m from London and a year seems like a fair amount of time to be able to invest in your child. Initially, not enough I’m sure but America three months is pretty standard, which is crazy. How can you come back to the office and be like OK, cool my three-month child is OK now. Do you think that could be more incentives that businesses could offer that would make that transition a lot smoother? And if so, have you got any examples, bad examples, or good examples of what you might have seen.

Brandee: It’s the popcorn meme with the deer. Right. That’s what it feels like. Go on. Go on. I mean, there’s a lot of bad examples. You spend 15 minutes on any mother app and you’re going to see it. I was fortunate to have an organization when I was pregnant that had female leadership in the HR department and everything. But even at a place that was what I would call a pretty progressive about maternity leave, tactically, it was a bit of a mess. And I loved that work. But the exit and re-entry were clumsy and poorly handled and not communicated very well. I was having to call insurance places or hey, did we get that coverage or for FMLA, is it this? And then spending two to three hours on the phone with an insurance agent while you’re having like a contraction? Not what I call ideal. So when I think about,, logical enablement that could be actionable and take away, I would say I agree with the idea of male leadership. But then also there would have to be a dedicated like almost like one person who is the one singular point of contact in that organization for exit and re-entry their one job for that time and space is to, and this could be, I know they’re going to be like not that many people are pregnant, so we can have a full time employee. That sounds crazy. It could also be for people who have medical exit leave, I mean, if you’ve got an organization of a decent size or even if it’s a small mid-market, you could still have one dedicated person who truly is the quarterback for that. Having that one consistent person versus like blast at HR whatever the heck I think would make this a lot easier, because there’s one voice that’s always there for you that’s on call, that when you’re in the middle of your gyno visit and they’re like, hey, this doesn’t look like it’s covered or I think we did this already because you’re high risk, so we have to do it this way or whatever. Like it would be good to know that there’s a stakeholder in the organization that would be that one consistent point of contact versus I’m throwing it into the ether of an email where it could get buried for weeks at a time and maybe not get followed upon. So I think there needs to be someone who does the handoff in the re-entry and not the day before or not the day of I’m talking like we’re at the 30-day mark, you’re out, hi, how are you? Anything that you need, wonderful. Because you can’t do anything in the US if you’re on FMLA, you’re not even allowed to have your organization’s email open. It’s like a whole thing because that’s how it works here, we’ll save that for another day. We can have a long talk about how it’s handled here because there’s a lot of work to be done. But I would say just like having that one person would be a life-changer. When I look back and think about how many people I had to knock on doors and follow back up with, I mean, it’s a little bit of a head-scratcher because on paper it seemed like a great program, but in reality, it was a poorly executed exit and return. And no matter how good their intention was and how good their heart was, the work wasn’t done. And that changed in post when other people in that organization became pregnant themselves, it went through a radical change. And I was like, yeah, now that your bladder is full and it’s hard to sit down and take this call, I know you’re going to make a better program. And they did, but not all organizations are like that. So like having a stakeholder for exit, 30 days, 60 days, 90 days, you are the two-week mark to return. Do you have x,y,z, do you need anything? You are at the seven-day week to return. 48 hours, 24 hours, live the first day. Anything that you need. So it’s just like and imagine it’s a campaign, treat it like its a campaign, thirty days out, nurture, nurture, nurture. You’ve got two weeks. You’ve got seven days. You’ve got 48 hours, 24 hours, live first day, 72 hours after check-in and unclosed the string like that seems logical to me and completely actionable.

Kate: Brandee you could build like a tool kit and sell it to companies.

Brandee: I was going to say this is a business plan! Hit me up with that angel funding.