Reducing Working Hours Across Your Business 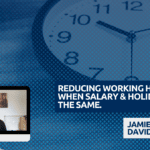 Jamie: Your other decision to cut the working hour week, is not one that I’ve seen, and it was puzzling because you might be in e-commerce which is maybe protected a bit from coronavirus, and it might have some benefits. But even so, that is a unique decision and I think one that a lot of people would want to ask you about. So where did that come from to start with and why?

David: I think we read about it some years ago or so. There’s another guy in a bigger firm with some kind of marketing agency and he cut his workload to twenty-five hours a week or so, which is even more special as he really does projects and works with clients very closely, so he had to tell his clients ‘we are only reachable until one o’clock or so.’ So that was probably even heavier and there are also some models in the world, I think there was Microsoft Japan, who introduced a four-day workweek or so. And so we’ve sometimes seen this in the news and the media or I read articles about it, and then when it comes to the new work thing and the ‘remote-first’ thing we thought about and we also thought about other new work possibilities and then stumbled upon this workload reduction thing again, I would say. And maybe you have heard of Parkinson’s law, which states that the work is expanding in the time available. Especially in our area where we do a lot of knowledge working and you have to be very focused and concentrated, and we thought it might be possible that you work fewer hours but achieve the same thing or maybe even more than you did before, and I think it could be difficult if you work in some kind of manufacturing or in medical schools like this. You need to have the time, I would say. But, especially in our industry where you do really lots of knowledge working. We thought, OK, it could work out and on the other hand, could improve employee satisfaction by far even for existing employees, but also for new employees, and so this really was one of the reasons why we decided to introduce or to cut workload by 25% but keeping pay while keeping everything the same; the amount of vacation or holiday days and so on. And yeah, that’s what we’re doing now for more than two months and we do not see any negative impact so far. So it’s really worked out so far and we had this kind of deadline or exit date, which is the end of this year. So we’ve said to all of our employees, so if it does not work out until the end of the year, we will roll back to forty hours. However, I think we’ve already made the decision to keep it like this. Like I said, any positive impact on the personal life of employees, on productivity, and also on new hires, of course. So the decision for you wasn’t that it would create any specific productivity value, it was just that you don’t need those extra ten hours and you can be just as productive. So the real value is the value to the employees and then to you, that retention. So, I think that the goal really was to keep the same productivity as with 40 hours, but then have the positive side effects like satisfaction and, personal life, hires and all this kind of stuff. At the moment, I think there might be an increase in productivity for some people and for some departments maybe. So actually I do not see any reason why to go back to 40 hours, at least in our specific environment, I would say.

Jamie: So this is definitely not a ‘one size fits all’ idea, and for you guys, you are certainly evidence that it can work. It does work. And actually, I can imagine for the people that you have working for you at the moment, they love it. And in your new talent acquisition, that is something that I would be, as a recruiter, I’d be shouting about that is how you then just slightly turn the heads of that talent that otherwise would be unobtainable. And when there’s that much competition, that can be the edge between the kind of quality of people knowing that you bring in and how long it takes. So I think, yeah, you’re certainly a case for the company to maybe look at it a bit more seriously. They might have read a few articles like you did and just kind of dismissed them. But after hearing this, maybe they’ll go back and read a few more and maybe even give it a go. So I think you have a really interesting story this year. One of the most unusual, certainly that I just wanted to share with people. So you guys, by the sounds of it, are also going to be hiring new people over the next year. So whilst we’re talking it would be good to understand, first of all, what are the main types of talents that you feel like you need to bring into the business?

David: It’s actually any department we have where we’re looking for new people, so we do not do any sales, so that may be interesting, so we don’t hire salespeople at all.

Jamie: The product must speak for itself.