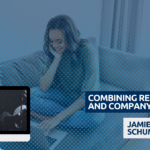 Tim Schumacher: We do one big summer week every year where, for a week or two, we really bring everybody here and it is like a bee house in here.

Jamie Rogers: How does that affect the company culture?

Tim Schumacher: It affects it in a big way because there are some segments of the company who barely ever see each other on a personal level. And we do one big summer week every year where for a week or two we really bring everybody in here; it is like a bee house in here. We also do some offsite stuff, and people tend to be a little bit more introverted who are attracted to that, people tend to be a little more process-driven.

I’ve read something really good last week about remote culture. And the essence there was: the good thing about a start-up when you build remote culture is you build processes which you need anyway, once you become bigger because at some point, think of big companies like Google or Facebook, for example, they don’t have remote work. But they, of course, have hundreds of engineering centers and things around the world. They need to be process-driven. And so, you need to build those processes anyway.

And why not do it rather sooner than later? So, I think that was a very good point that person made and is obviously an advocate of remote working.

And that’s true. So, I think we’re more process-driven than many other companies. Again, has pros and cons.