The North Rhine Start Up Strategy 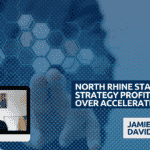 Jamie: Well, this year has been a pretty good year for you. So for the people watching this, I just want to give a quick summary, because stories like this, they’re kind of not supposed to happen, this year, for most businesses and for you guys it did, so I will flash up your LinkedIn post on the screen so that people can actually see it, but you were ranked in the top 100 fastest growing tech start-ups in Germany by GlassDollar. You are bootstrapped and, by the sounds of it, you have no plans to raise any external funding. So those two points alone this year would have probably created a few surprised faces on their own. A bit more impressive than that is that you also did this well, kind of making it harder for yourselves to do it. You canceled your plans to move to a big office and became a ‘remote first’ team and you reduced your employees working hours from 40 hours a week to 30 hours a week. So now most people are probably a bit confused because again, after that, you then went on to hire 13 new people, which is a lot for a small business. You’ve retained everybody throughout this economic climate and you’ve now established your first layer of team leadership as well. So this conversation, I hope, will give some understanding about the details of how all of that happened, despite two of those decisions, which arguably would make it harder and the people watching will at least find some inspiration and some motivation from listening to what you’ve done and maybe even some learning lessons as well. So, if we could start with the first point on your financing because there is still a weird attitude around start-ups that don’t go down the VC route. Why are you remaining bootstrapped and why are you not raising money to accelerate your growth?

David: I think that the simple reason is that we don’t need debt. So, we really feel comfortable not having any external VCs or business angels telling us what to do and how to do it. I mean, at the moment there’s just no need for further capital so we could really grow from our organic growth and from organic cash flow. And we’ve been very conservative in the past and maybe also saved a little bit in the past. So we always have these KPIs and goals to achieve at least 10 percent revenue margin and this kind of stuff. So we really try to be very profitable, I would say. I think that the process which led to those numbers is that this LinkedIn post started last year when we were at around 10 people, and we thought, OK, we’re thinking of lots of things we will do, so we have to rethink processes and think about mission and vision and also the core values we want to have within our company and so there was a transformation from last year, starting last year, which is still ongoing. But we really want to build BillBee on solid ground, and be profitable, have solid growth, but no hyper-growth, and really some kind of German conservative start-up would say, and so we do not want to 10X within one year or two years. We really want to keep our solid growth. And that’s why we can afford not to have any external funding because we always can hire as we need and always can grow as we need.

Jamie: So you’ve kind of investing a lot of time into preparing this. You’ve made decisions that would enable you to grow organically and almost work backward from there on your key metrics.

Jamie: Okay, well, that is a very different attitude to what you would find in most startups in Berlin, and I think kind of echoes a lot of other companies in this part of Germany, in North Rhine-Westphalia, there tends to be more of an emphasis on stability, profitability rather than growth at all costs.

David: Might be the case. Maybe that’s probably a reason. Yeah.

Jamie: I think, for some people that would be really interesting, not everybody wants to work for a 10x company. Some people do just want to work for someone that actually builds an awesome product and grows organically.