The Power of a Strong Personal Brand 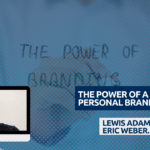 “Things are changing around the globe.

From now on, companies will be more open to pursuing talent where it exists, not where they want it to exist.

So, your online personal brand is more important than ever.”

Eric Weber, data thought leader and GM of Data Science at Yelp said this in our latest installment from our webinar with Lewis Adams-Dunstan on building your personal brand.

But where do you start? It’s a daunting prospect if you’re not already that active on social media. Right?

Eric goes on to say that:

“It doesn’t take tens of thousands of followers or connections.

What matters is the QUALITY of the connections you have and how you engage with them,”

Watch the full video below.

The final installment of this fantastic series will be posted next week. So stay tuned…

Lewis: What are the benefits of doing that, specifically by short a long term, you know, creating that personal brand? What kind of value can that bring? From your perspective?

Eric: So, I think we’re definitely a culture that thinks about immediate benefit. Typically, like we’re used to social media like we post something, we get engagement, we submit something and we get quick feedback. Building a brand and building a rep, I think it’s just a reputation of who you are. And what you create now is going to have implications and an impact on you many years from now. So it’s something that we’re used to thinking about. Like, I’m going to get an immediate payoff from this. But if you think that way, you’re probably going to stop trying pretty quickly. And so the benefits are that people understand what you’re all about. Yes. It’s really important, especially in a technical field, that people, understand that you get what it means to do that working day to day. That you run into issues that they run into, that you can speak to some of the most important content and issues that you have. But what’s really important is that, like I said before, that they understand who you are as a whole. Are you somebody that they can imagine working with or partnering with? A lot of people who end up becoming independent consultants do so because they have established a lot of partnerships and a lot of people who want to work with them through their engagement and presence on social media, LinkedIn in particular. So, the best thing I can say is that you may not see the payoff in immediacy. Sometimes you will be surprised, but it’s more of like building it up day by day, creating things regularly, engaging regularly. Imagine that you are on LinkedIn, right? And you imagine that you are looking through; Who are the people that you enjoy interacting with? Who are the people that you can imagine working for or working with? And then think about the things that they do that allow you to feel that way, right? I feel like there are so many good examples and I should just make a list of this at some point. But people that I know like, hey, this person is somebody that I would like to work with or somebody I would like to hire or on the other side, there are a lot of leaders that I follow and I’m like, I could imagine working for that person.

Lewis: Yeah. Eric: At the same time, there are also situations that, and this is something else to know on social media, people read what you’re doing and saying they may never interact with it, but they see it. And I have definitely seen situations where I look at something that unfolds and I’m like, I just wouldn’t work for that person.

Lewis: You do have to think a little bit before you put something out there. Right? Do not just have a bad day and post.

Eric: Yeah. And we all have bad days. Right? We have bad days, we’re frustrated. There are definitely times where I’ve written a post where I’m just feeling all right, I can’t post that like it’s just not going up.

Lewis: Sometimes it just helps just to actually write it, and then delete it…

Eric: Without a doubt. But when it comes to a personal level of engagement. It’s very much how you engage with people, matters a lot. Being open, being positive, being kind. People notice these things and it’s as much a part of your reputation about who you are as your technical skillset. At the end of the day, even an on-site interview, remember that typically if you get to an on-site interview, they believe that you’re technically competent. What they’re trying to figure out is do they want to work with you? And there are other ways to establish that that isn’t just in an onsite interview.