Why are Tech Businesses Reluctant to Hire from Oversears? 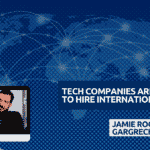 Jamie Rogers: I think tech companies are starting to feel the talent shortage, but even so, they are often reluctant to adopt or commit to hiring people internationally. It’s like they have this idea, they know they should do it. And then when I suggest it to them, I can see them get uncomfortable about it.

Marco Garbrecht: Definitely. It’s pure change within the last I’d say two to three years because this war has become so intense for those talents. I mean, if we are talking to a Java Developer, we know for sure that he is talking to the most three important rivalries we have for competing for tech talent.

Marco Garbrecht: That’s for sure. Basically, that’s not a good situation because you’re spinning circles here.

Marco Garbrecht: But still, it’s very hard to attract those people. So, yes, we have a story for Cologne. And I love Cologne, of course, but it isn’t easy compared to Berlin, compared to Munich because it rings a Bell.

Berlin rings a Bell for everyone. Cologne doesn’t, as you mentioned at the beginning. So it’s going to be a process definitely.

Jamie Rogers: Yeah. All right. Well, anyone watching that’s just seen two recruiters whose full time job is to find people and agree there is a talent shortage, I hope it doesn’t need any more convincing that they need to look at their employer branding and how they seduce people.